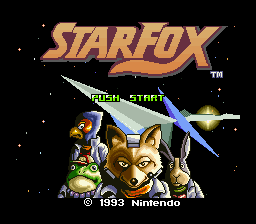 Known for introducing Nintendo's Super FX chip technology, Star Fox is a 3D space shooter with polygonal graphics (a rarity for the time), standout voice effects, and a grand musical score. Players portray Fox McCloud as he pilots his Arwing fighter through both space and planetary areas, gunning down enemy ships (with lasers and nova bombs), dodging lasers, flying through narrow gaps, firing at tough bosses, and more. Your three wingmen, Slippy Toad, Falco Lombardi, and Peppy Hare, are on hand to lend a helping hand, but you must cover their backs as well. There are two hidden levels to find, power-ups to collect, and warps to discover. Gameplay is smooth, though there is some slowdown, and players can select three different pathways (easy, medium and hard), making for a title that is fun for gamers of varying skills.